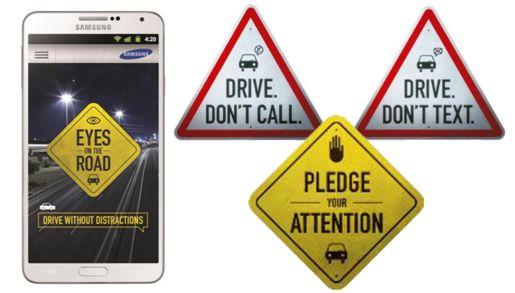 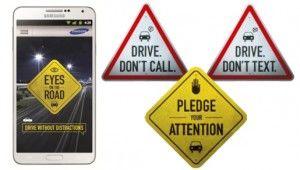 Samsung today announced the launch of “The Road Comes First” campaign targeted at Singapore road users to promote the responsible use of mobile phones on the road. This campaign is endorsed by the Traffic Police and Singapore Road Safety Council, given the increasing problem of illegal mobile phone use among drivers; the total number of summons increased 46 percent, from 1,169 between January to June in 2012 to 1,705 over the same period in 20131.

A Samsung-commissioned survey found that a large majority of 83 percent of the Singapore drivers surveyed admitted to using their mobile phones, without a hands-free kit, while at the wheel in the last 12 months. They were most likely to be using GPS or map applications, checking their mobile phone screens, and texting. This was in spite of an overwhelming majority of 95 percent of respondents being aware that it is illegal to use a mobile phone while driving without a hands-free kit, while the car is in motion. Complacency seemed a key cause of the unsafe behaviour; when asked why respondents used their phones in this manner, the feeling that it was safe for them to do so was the response most cited.

“Smartphones are increasingly ubiquitous in Singapore, with users depending on their devices for everything from making phone calls, map navigation to social networking. As a mobile industry leader, Samsung is taking the responsibility to encourage drivers to put aside their phones while driving, and focus on the roads,” said Irene Ng, Vice President, Marketing, Samsung Asia Pte Ltd.

To encourage safer driving behaviour, Samsung has developed an “Eyes on the Road” mobile app that helps drivers switch off mobile distractions when they get into their cars by activating the Drive Safe mode.

Survey: Singapore drivers self-confident, yet distrusting of other drivers
Samsung commissioned a survey to understand driving habits in Singapore, and driver preferences and perceptions, in relation to the use of mobile phones on Singapore roads. 513 adults with drivers’ licenses and who had driven in the past four weeks were surveyed. Survey highlights include:

Accountability to passengers
Respondents displayed consideration towards the safety of their passengers, with 93 percent saying they would stop using their mobile phones while driving, if their passenger asked them to stop.

“The use of mobile phones while driving stems from the misconception of the drivers, thinking that they are capable of multi-tasking,” said Adjunct Associate Professor Gopinath Menon, Division of Infrastructure Systems and Maritime Studies, School of Civil and Environmental Engineering, College of Engineering, Nanyang Technological University. “This is untrue, as when a person does two tasks, in which both demand a certain amount of attention, multi-tasking is unsafe and impossible. When a driver is behind the wheel, he should concentrate on driving and avoid other distractions to avoid accidents.”

Apps to encourage safe driving
“Eyes on the Road” is a mobile app developed by Samsung, designed to help drivers cultivate the habit of driving without distraction from their mobile phones.

“Based on our data, each year one in every six cars insured by MSIG has an accident which results in a claim. Some of these accidents can be prevented if drivers could concentrate more and keep their eyes on the roads,” said Paul Faulkner, CEO, MSIG Insurance (Singapore) Pte. Ltd. “At the end of the day, it’s really not worth putting yourself and other road users at risk because of a moment of distraction.”

“Shell has long been a strong proponent of road safety and we have been actively reaching out to educate the public on road safety. Road safety is everyone’s responsibility and any distraction, such as the use of mobile phone while driving, can compromise safety. By partnering Samsung in this initiative, we hope to encourage motorists to be responsible and do their part to make our roads safe for all,” said Louis Tan, General Manager, Retail Sales and Operations, Shell Singapore.

“Bus shelter advertising targets commuters effectively: our media formats sit within the line-of-sight of commuters, communicating to commuters but without distracting them from what they should be doing, which resonates with the theme of Samsung’s initiative – The Road Comes First!” – Kelly Khoo, Sales & Marketing Director, Clear Channel Singapore.

“Radio is an effective channel to communicate with drivers. We are glad to be in partnership with Samsung, and have Power 98 as the official radio station to remind the public and our listeners on the importance of safe driving,” said Doreen Ong, General Manager, SAFRA Radio.